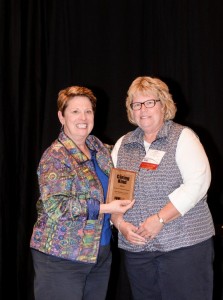 Jane Robison, CNA and Ward Clerk at Harlan County Health System has been chosen by her co-workers to receive the 2016 Nebraska Hospital Association Caring Kind Award. Katie Fleischmann, Director of Nursing at Harlan County Health System stated: “Jane is well deserving of this award. She exemplifies the meaning of caring and kindness. We are so fortunate to have her as a member of our team.” Jane has been a member of the HCHS family since November of 2008.

Here is an example of what her co-workers had to say about Jane:

Jane goes above the call of duty without being asked.  She takes time out of her day to bring flowers to patients or gifts to patients on Christmas and tells them it’s from all of the HCHS Staff.  Jane is the type of person who lights the room up with her smile.  She comes to work with a smile on her face and she is always willing to help others, Rather that person is a co-worker or a patient. Jane goes out of her way to purchase personal supplies for patients who may not have such items at their own home.  To nominate Jane is an easy decision as she is one of the most kindhearted, selfless, and giving.  It’s a joy working with her as she makes every day that much better.  She has helped multiple areas of our facility, including nursing staff, office staff, outpatient, and in the kitchen.  She is vital employee and truly one of the most compassionate employees at HCHS.

For more than 30 years, the Nebraska Hospital Association has been honored to bestow awards to Nebraska health care employees that have risen to the top by providing service excellence and dedication to their profession with the caring kind award. These award recipients commit themselves to the betterment of their hospitals and health systems, their customers, their coworkers and their communities. The Caring Kind Awards Luncheon was held on Friday, October 23, at the Embassy Suites Conference Center in La Vista during the NHA Conference

Congratulations to Jane on this very prestigious award.

Past Recipients of the Caring Kind Award

There are no upcoming events.